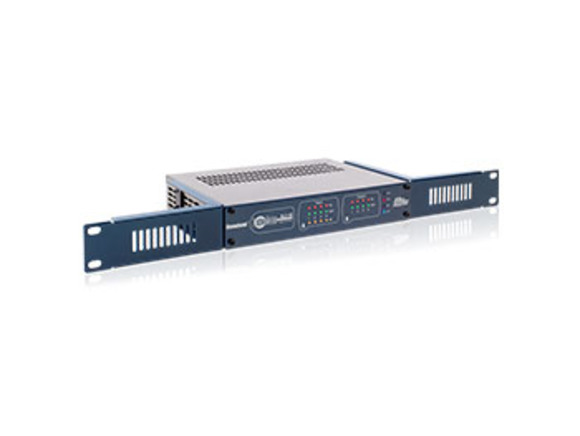 The BLU-50 is a half-rack width processor that offers a fixed configuration of four inputs and four outputs, configurable signal processing, logic processing and BLU link. The device can be powered with the included 12VDC power supply but can accept 12-48VDC via a terminal block connector. The BLU-50 can also be powered with PoE+ via the Ethernet port, allowing the device to be powered, configured, controlled and monitored using a single Cat 5e cable.

The analog inputs of the BLU-50 provide software configurable gain in 6dB steps up to +48dB per channel and software selectable Phantom Power per channel. Phantom Power, Signal Present and Clip information per channel is easily accessible, without the requirement for a PC, from clear front panel LED indication.

The BLU-50 can be configured, controlled and monitored from both the newly introduced HiQnet London Architect™ version 6.0 and HiQnet Audio Architect™ version 1.4, to be released soon, and is compatible with other members of the Soundweb London family. Its 48 channel BLU link bus represents channels 1-48 of the larger 256 channel BLU link bus when integrated with the BLU-800, BLU-320, BLU-160, BLU-120, BLU-BIB and BLU-BOB devices. Up to 60 BLU link compatible devices can share channels on a single bus.

HARMAN designs, manufactures, and markets a wide range of infotainment and audio solutions for the automotive, consumer, and professional markets. It is a recognized world leader across its customer segments with premium brands including AKG®, Harman Kardon®, Infinity®, JBL®, Lexicon®, and Mark Levinson® and leading-edge connectivity, safety and audio technologies. The Company is admired by audiophiles across multiple generations and supports leading professional entertainers and the venues where they perform. More than 25 million automobiles on the road today are equipped with HARMAN audio and infotainment systems. HARMAN has a workforce of 14,800 people across the Americas, Europe, and Asia and reported sales of $4.7 billion for the last twelve months ended December 31, 2013.