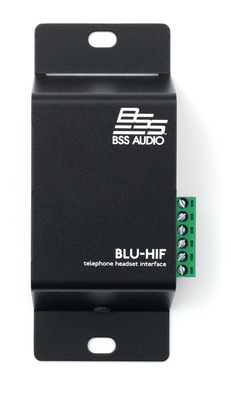 The BSS Audio BLU-HIF Telephone Headset Interface facilitates connection of the headset jack of a VoIP/digital phone to an AEC input and analog output of a Soundweb London device. The BLU-HIF therefore allows the VoIP/digital phone to be used as the dialing interface and hybrid for a conference system. This simple interface eliminates the programming requirements associated with third-party control systems, while providing a familiar and low-cost dialing interface to the end user.

The BLU-HIF features an RJ-22 jack for connection to the headset jack of a VoIP/digital phone, a balanced input (Tx) for sending near-side audio, and a balanced output (Rx) for receiving far-side audio. While the BLU-HIF provides substantial isolation of the Rx and Tx signals, near-side audio will still be heard on the Rx channel due to the presence of side-tone. As such, BSS Audio recommends always feeding the Rx channel to an AEC input, as opposed to a standard analog input. The AEC algorithm will remove the side-tone. The Tx channel connects to a standard analog output.

The additional 2.5mm jack facilitates connection of two-way communication devices such as cellular phones to the Soundweb London device. This gives the end user the advantage of having an alternate communication path to the outside world, which is particularly useful as a backup to the main phone system.