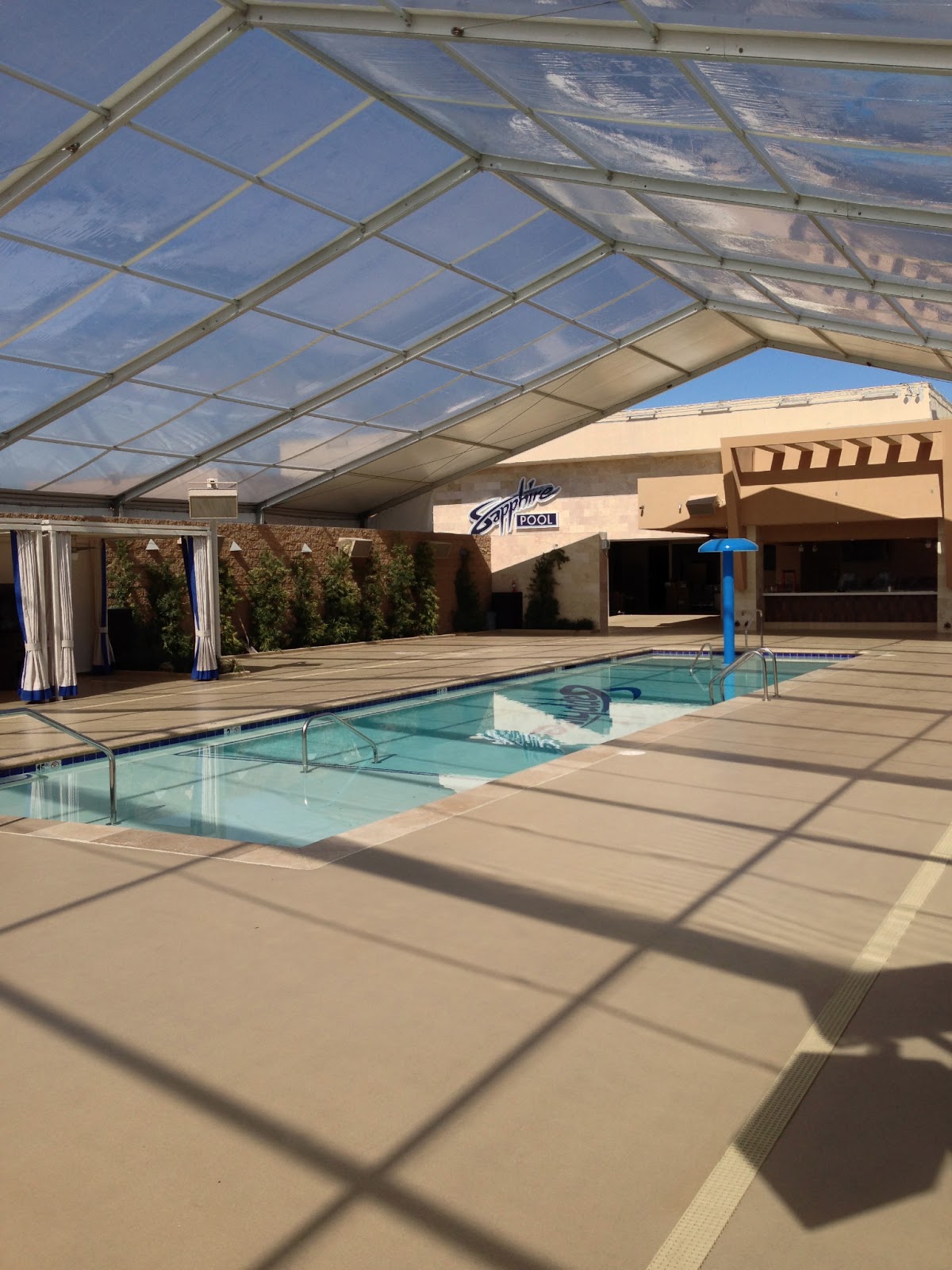 LAS VEGAS, Nevada — Sapphire bills itself as the world’s largest nightclub, all 71,000 square feet of it – and it’s about to get even bigger. March 2013 will see the opening of the Sapphire Pool and Day Club, a place to relax, party and enjoy music courtesy of a HARMAN Professional audio system featuring JBL, Crown and BSSAudio components. An extension of the main Sapphire complex, the club will be able to accommodate more than 700 guests with amenities that include a pool, two hot tubs, an indoor/outdoor bar and restaurant, a DJ booth and entertainment area and much more.
Two Las Vegas firms collaborated on the sound system design and installation: consulting firm Coherent Design (www.coherentdesign.net) and systems integrator System Services Inc. (www.ssivegas.net). “We had designed the original Sapphire Club’s JBL and Crown-based sound system, which has had literally no problems after more than 10 years of use,” said Kevin Potts, Principal of Coherent Design. “Asking us to do the distributed audio system for the new Sapphire Pool and Day Club was an easy decision for the owners.”
“The pool is surrounded by high walls, which facilitated the mounting of 16 JBL AM7215/66-WRX and four AM7215/95-WRX speakers near the top of the walls, facing down. When we have DJ events with hundreds of people around the pool, the system needs to deliver a lot of low-frequency impact,” explained Potts. “We chose the AM7215 loudspeakers for this application because we’ve installed them in another Las Vegas club with great success and knew they’d work well here.
For extended bass response, we also placed six ASB7128-WRX dual 18-inch subwoofers and six ASB7118 18-inch subs in custom-built enclosures and in the landscaping around the edges of the pool.”
“The speakers are all treated with JBL’s top-level WRX weatherproofing, which is extremely effective,” Potts continued. “We’ve had WRX-treated JBL speakers in the field for more than a decade and they’re still performing flawlessly.”
Mike Mahoney, President of System Services, noted that proper coverage for outdoor system installations is always an issue.  “Because we were able to place the AM7215 speakers along the walls surrounding the pool and because of their excellent coverage pattern we had no acoustical issues,” confirmed Mahoney.
The Sapphire Pool and Day Club’s DJ booth is outfitted with a pair of JBL VP7212/64 2-way speakers mounted on U-brackets. Six Control 47CT in-ceiling speakers in the ceiling of the bar and seven Control 29AV wall-mounted speakers serve the ends of the bar and the front entry areas. Six Control 67HC in-ceiling models deliver sound to the restaurant and 10 Control 24CT in-ceiling speakers provide sound to the men’s and ladies’ restrooms.
“We chose these particular JBL Control Series loudspeakers because the line offers a wide variety of models tailored to specific applications,” noted Potts. “We needed full range sound for the bar area but the speakers had to be inconspicuous, so the 47CT’s extended bass proved ideal. The 67HC has a very focused coverage pattern, just what was needed for the restaurant. The 24CT works well where in-ceiling installation space is limited and the 29AV is just a good all-around small-box speaker.”
The speakers are powered by Crown amplifiers including five MA12000i, 10 CTs 2000, two CTs 1200 and 11 CTs 600 power amps, located at the ends of the pool in two dedicated equipment rooms. “It’s something of an unusual arrangement but because the property is so long the best configuration was to place all the amplifiers and equipment in two rooms and have fiber running from one room to the other,” Mahoney pointed out. “We have used Crown amps for years – they are the industry standard for powering distributed audio systems and they’ve never let us down.”
The system’s audio networking is provided by a BSS Audio BLU160 Signal Processor with Digital Audio Bus, BLU-BOB2 break-out box and BLU-BIB break-out box input expander. “The BSS components handle all the audio signal routing, processing for the speaker crossovers and equalization,” Mahoney said. The entire system is configured and controlled using BSS London Architect and Harman HiQnet software, and according to Mahoney, onsite system tweaking was extremely easy. “Kevin Potts and the Coherent team gave us a great design to work with and when we were done with the installation we fired everything up and found we had a drop-dead great sounding system right out of the box.”