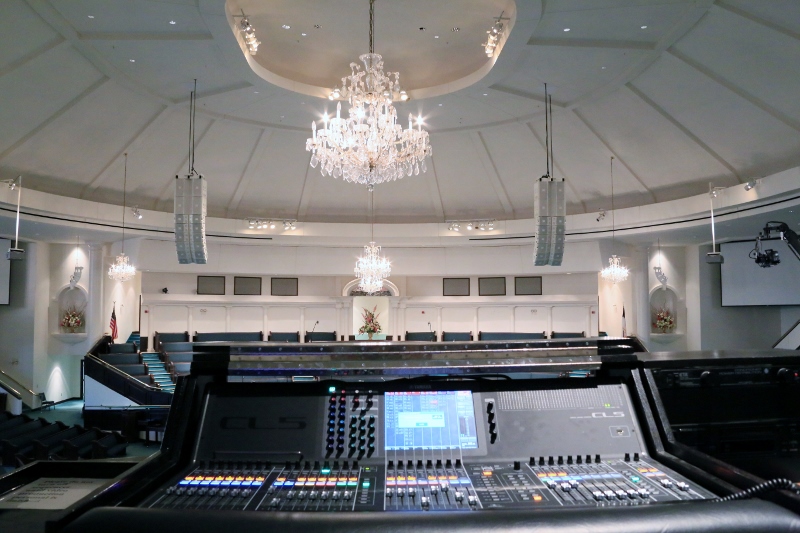 STC Audio Video deploys JBL, Crown and BSS solutions to create a powerful and versatile audio system for the 3,000-seat house of worship

Established in 1896, Beulah Baptist has relocated several times before moving into its current facility in 1999. Featuring a sizeable domed-ceiling structure and seating for 3,000 congregants, the church recently hired STC to replace its 15-year-old audio system with a new state-of-the-art audio solution that could deliver excellent sound quality during sermons, choir performances and full band worship performances. After careful consideration, STC selected a complete JBL VTX Series audio solution for its power, clarity and transparent reproduction.

"HARMAN has a reputation for making speakers that provide excellent performance," said George Seldon, President and CIO of STC Audio Video. "I chose the VTX V20 because it can truly go from 20 Hz to 20k cleanly, and it has a lot of dynamic range. The clarity is just phenomenal."

As a systems designer, Seldon makes an effort to thoroughly determine what his clients want and need, rather than just offering cookie-cutter solutions. In the case of Beulah Baptist, there were several important aspects of the church's programming that the sound system needed to support, including exceptional speech intelligibility for sermons and plenty of extra headroom for a 125-member choir.

"When the pastor speaks, everybody needs to hear him clearly—if you can't hear the pastor, then why are you in church?" Seldon said. “The second requirement was to make sure the system could cleanly reproduce the church band and allow the musicians to hear themselves clearly. The third was that it needed to the clarity to accurately reproduce the 125-member choir."

To achieve these goals in such a large space, Seldon needed to design a system with plenty of headroom. The JBL loudspeakers and Crown amplifiers proved to be more than up to the task, providing the clarity and high SPL that the church wanted.

"They like it loud, they like it in your face, but with the efficiency of this system, it never has to go above -20 dB on the master fader," Seldon said. "The performance matters, and that's where the VTX V20 system fits in. It met all its objectives—it really did."

Not only did Seldon customize the sonic aspects of the installation, but he also made sure it was aesthetically right for the space. In this case, he wanted the speakers to blend in with the white walls and ceiling of the church, which was a challenge considering the speaker cabinets are black. But Seldon, who regularly consults with an interior designer about the visual aspects of his installations, came up with a solution.

"I had the speakers custom-painted white, since the church is all about aesthetics," Seldon said. "I always try to put PA speakers in a facility that fit with the architecture of the room. Whatever the colors of the walls, that's the color the speakers will be."