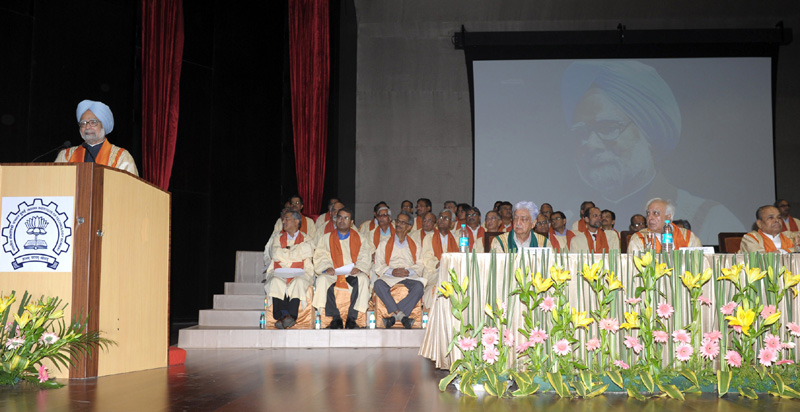 POWAI, India — The Indian Institute of Technology Bombay (IIT-B) recently completed a major renovation of its 1,500-seat Convocation Hall.  The venue’s new interior spaces were designed by Mumbai architects Sandeep Shikre and Associates. Mumbai- based systems integrator ADJM Technologies was contracted to provide expert consultancy on the A/V system upgrade, which included HARMAN’s AKG microphones, BSS signal processing, Crown power amplifiers, JBL loudspeakers and a Soundcraft console.
The IIT-B is recognized as a worldwide leader in the field of engineering education and research, and is known for the quality of its faculty and the outstanding caliber of students and alumni who are successful entrepreneurs, scientists and leaders in multi-national companies. The IIT-B campus is situated in picturesque surroundings at Powai, Mumbai and extends over 200 hectares. In the recent past, the IITB has expanded to now include more than 584 major buildings, including a Convocation Hall, which recently had the honor of being inaugurated by India’s Prime Minister, Dr. Manmohan Singh.
The primary use of the Convocation Hall is for graduations and convocation, and the hall also hosts audiences on a regular basis for presentations, training programs. It can also be configured for use as a theater for viewing movies, and serves as a focal point of faculty and student activity.
“As an institution that has been the hallmark of technology and innovation, our mandate for the A/V systems upgrade at the auditorium was to achieve crystal-clear, high-quality sound with ease of operation and maintenance,” said Prof. N. Venkataramani, Dean (IPS), Infrastructure, Planning & Support, IIT-B. “After a thorough study of the market, we were convinced that a Harman high quality audio system, as a first choice among other brands, supported by expert consultancy from ADJM Technologies, was the right choice, thus fulfilling our audio requirements in an integrated manner that is befitting of the institution’s reputation and infrastructure”.
“IIT–B management was very clear on the requirement for Convocation Hall to have an audio and video system that was world-class,” said Anand D. Mistry, CEO of ADJM Technologies. “After evaluating the needs with the technical support of our local HARMAN dealer, those involved in the decision agreed that an all-HARMAN system would best meet the requirements and provide the highest levels of performance and flexibility. The project needed not just individual products, but an integrated system design to ensure that the system’s output would be optimal for all applications – be it presentations, theatre or training programs.”
Mistry continued, “We didn’t just want to upgrade the Convocation Hall A/V system – we wanted it to be future-proof for at least 10 years. In addition to using high-end audio components from HARMAN, we designed the video and control systems using the very latest digital technologies. The system’s infrastructure design is so elegant that a single Cat-6 cable was specified for distribution of video and control signals throughout the entire hall.”
Once system design parameters were established by ADJM Technologies, the entire renovation including installation of the audio and video components, switching, control systems and wiring, took the project 60 days to complete, from start to finish,” Mistry noted. “Since everything in the system is so well-designed and works so well together, the installation itself went quite smoothly and we did not encounter any loopholes or difficulties, ensuring the project was complete well within the stipulated time.”
The Convocation Hall system includes six JBL SRX725 loudspeakers, four SRX712M stage monitors and two SRX728S subwoofers, selected on the basis of high performance and simplicity in installation and for their ability to deliver powerful bass for both cinema sound and live sound applications in the auditorium. The speakers are driven by Crown CDi 1000, XLS 2000 and Crown XTi 6002 power amplifiers. The multipurpose auditorium’s complex audio matrix requirements are managed by a BSS Soundweb London BLU-100 signal processor. Two AKG PCC-160 boundary layer mics and a Soundcraft FX16ii 16-channel mixing console complete the installation.
Mistry also explained that support from the HARMAN team throughout the design, specification and installation phase was excellent. “They came immediately to the site when we informed them that we had the go-ahead for the project, even though we let them know at the last moment! Ultimately, the staff at IIT-B is very impressed by the overall performance of the system,” Mistry concluded.
Commenting on the continuing success of  key audio installations in the institutional segment, Prashant Govindan, Sales Director, Harman Professional India, said, “ It is  a matter of great pride for HARMAN to be able to meet the audio requirements of a prestigious institution like IIT–Bombay. The requirements of the institute and the short timelines were seamlessly met by our Harman Professional team led by Karan Kathuria, National Sales Manager (Installed sound), working directly with ADJM. The proof is the crystal-clear audio now being enjoyed by the students and the entire campus community in the auditorium. Harman’s high-definition product range and technical capabilities, coupled with ADJM’s expert support, have proven to be a winning combination.”
Other similar projects recently undertaken in India by the HARMAN team include the Guwahati Medical College Auditorium and Chettinad Medical College Auditorium in Chennai. Worldwide, HARMAN has a rich heritage as the sound solutions partner for numerous, prominent auditorium, theatre and performance venues, including 10 stadiums at India’s 2010 Commonwealth Games and the 55th annual GRAMMY® Awards in Hollywood, CA.