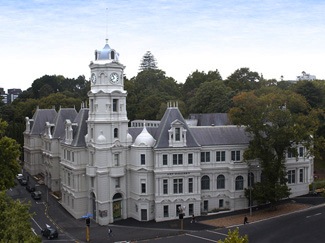 NORTHRIDGE, California – New Zealand's oldest and largest public art gallery, the Auckland Art Gallery Toi o Tamaki, recently underwent a massive restoration that transformed the building into a world-class cultural facility that now features a world-class audio system with HARMAN’s JBL loudspeakers. The upgrade was designed and installed by two New Zealand-based companies, Jands and Provision, working together to provide a networked audio system as part of the AV upgrade.
Opening in February 1888, the gallery has increasingly become a focal point of Auckland's art scene, and now lies at the heart of the New Zealand art experience for both the local community and visitors alike. Stephen Ward, project manager and lead designer for the project, commented, "This project was unique, in that two of the buildings we were cabling were Heritage Buildings over 100 years old, and not linked, while demolition and construction continued around us. I was able to draw from my knowledge and experience from working and maintaining similar heritage sites in the UK, such as the Royal Society of Art and Tait Britain to assist with the planning and implementation of this project, allowing me the insight and understanding as to how the client would ideally use the spaces.”
In total, over 250 HARMAN JBL speakers were installed throughout the complex including Control 26CT, Control 24C and JBL Control 52 satellite speakers.
One of the design challenges was to provide an audio network with up to 25 discrete zones and over 100 patchable inputs (four per zone), as well as a separate BGM and paging level control per zone. Each of the 25 zones then needed the flexibility to be virtually patched to any combination of other zones. Fortunately the BSS Audio Soundweb London BLU-100 signal processors, featuring a 48-channel digital audio bus, gave the flexibility required to make this work within the tight budget.
Ward continued, "The audio was of high importance due to the changing nature of the open spaces in the art gallery and varying exhibitions and the use of Soundweb London allowed us complete flexibility in its design and linking. This provides the ability to expand the AV systems in a modular way and meet the users ever changing needs.”
Provision went about installing 10 Soundweb London BLU-100 devices between the five AV plant rooms. An audio network was setup between the plant rooms using fiber optic cable, which linked the digital audio bus and Ethernet control.
The mammoth task of mapping the level controls from 10 different Soundweb London DSP devices began.
Logan Bent, programmer for Provision with 15 years’ experience and dozens of existing projects involving BSS Audio went about the task of integrating the whole system. Logan comments, "The actual programming was relatively straight forward once a clear scope of works and client discussions in developing the interface were conducted. The most time consuming component during implementation and commissioning was the grand scale of the project. The greatest challenge with the interface was coming up with a way to overflow any of the inputs to any of the output zones. Along with that a simple way to disable a certain link was needed.”
For more information on ProVision, please visit www.provision.co.nz