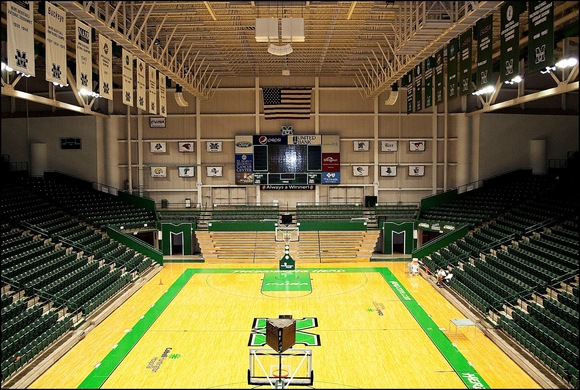 “We chose HARMAN products because they were the best fit for me as the systems integrator,” Kibler noted. “I am very familiar with the JBL, Crown and BSS Audio products we used and in my experience they are the most reliable in their respective categories. I did consider other brands but in addition to their performance advantages concluded that the HARMAN brands offer the best bang for the buck.”

The JBL VRX932LA-1 loudspeakers are suspended from steel trusses around the interior of the arena. Each array column consists of either six or four loudspeakers. Two of the arrays are used for events such as commencements where only the arena’s stage is needed; these arrays are turned off during sporting events when the rest of the speakers are used. The system is set up so the loudspeakers’ focal points and delays are automatically reconfigured at the touch of a preset, using the Soundweb London BLU-160’s Control Inputs and Logic Outputs. In addition to the main arrays, four JBL ASB6128V subwoofers located at the center of the arena provide low-frequency reinforcement.

“With a job this big it’s especially true that time is money,” said Kibler, “and our installation crew marvelled at how easy it was to mount the JBL VRX932LA-1’s. Their specially designed quick-release integral rigging hardware, compact size and relatively light 46-pound weight made it possible for us to complete the installation under the hours we had bid for the project.”

“The JBL VRX932LA-1 loudspeakers allowed us to get good, clean, crisp audio to every seat in the arena,” Kibler continued. “One feature that came in really handy was their Array Configuration Selector, a series of switches that control the output of each high-frequency section in the array. This lets you set each VRX932LA-1 to deliver more high-frequency output to a distant location or less output to seats that are closer up. This feature really came in handy and allowed us to quickly do high-frequency ‘shadowing’ or fine-tuning for the near and far throw boxes in the speaker stacks. We boosted the highs 3dB on the top two arrays in the six-array stacks. We did the final high-frequency ‘sweetening’ with the BLU-160 during the commissioning of the system.”

“Programming the digital signal processing for an audio system has been a part of my work since DSP first came into the industry, and the BSS Audio Soundweb London audio networking products, DSP and setup software used in this installation actually made life pretty easy,” Kibler stated. “Not only did it provide a high level of system tuning, it enabled us to set up custom GUI [Graphical User Interface] pages and shortcuts, for example, the page that instantly switches between the stage speakers and the main venue speakers. The University staff wanted the system to be easy to operate, and Soundweb London made this possible.”