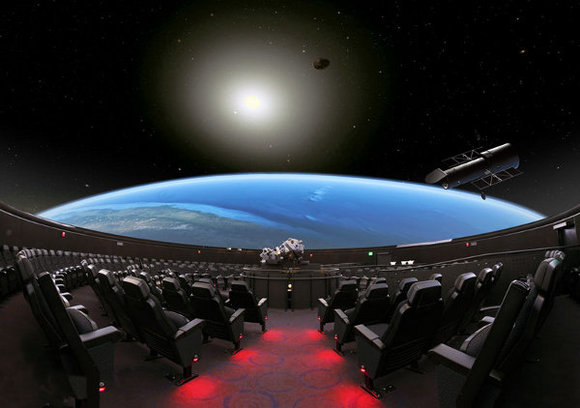 NORTHRIDGE, California – One of the most stellar attractions at the Museum of Science in Boston is the Charles Hayden Planetarium—more spectacular than ever after a recently completed $9 million renovation. The Planetarium is the most technologically advanced theater in New England, and in addition to a state-of-the-art digital projection system, the Planetarium features an equally impressive 10.2-channel HARMAN JBL loudspeaker system.

“We pride ourselves on designing and installing the world’s best domed planetariums and visualization theaters,” said Marcus Weddle, Marketing Director for systems integrator Sky-Skan, headquartered in Nashua, New Hampshire. “Although admittedly the visuals are what get peoples’ attention in a planetarium, the experience would be somewhat hollow and incomplete if you didn’t have sound on a scale to match. In a domed theater environment, that means large-scale surround sound.”

“The sound system is great,” said Darryl Davis, Planetarium Systems Coordinator at the Boston Museum of Science. “The low end is much better than we had with our original theater, and if the industry catches up to 10.2, we are already prepared for it.”

“Obviously, we couldn’t let the speakers intrude on the visuals in any way,” Berna said. “We hung the speakers from the roof, behind the projection screen, and positioned them to give even sound distribution throughout the dome. Although they needed to fill a large space, we were able to get the SPL and sound fill we needed using just 10 JBL main speakers and the two JBL subwoofers, because of the speakers’ wide yet precise coverage pattern and high power handling capability.”

Berna said, “We collaborated closely with JBL engineers and the acousticians on the project. In addition to the fact that the shape of a dome can be acoustically problematic by nature, the original construction needed better isolation from the outside environment. We solved those problems and the acoustics and audio quality in the Charles Hayden Planetarium now are outstanding.”

“The purpose of a planetarium is to transport people to another world,” Berna concluded. “We’re extremely happy with the way this installation turned out. The enveloping quality of the surround sound system and the absolutely stunning visuals really make you feel like you’re traveling through space and time and you completely forget that you’re in a theater.”

The AE6000 models of high-powered AE Series speakers have been replaced by the new AE7000 models which contain JBL’s newest Differential Drive transducers.