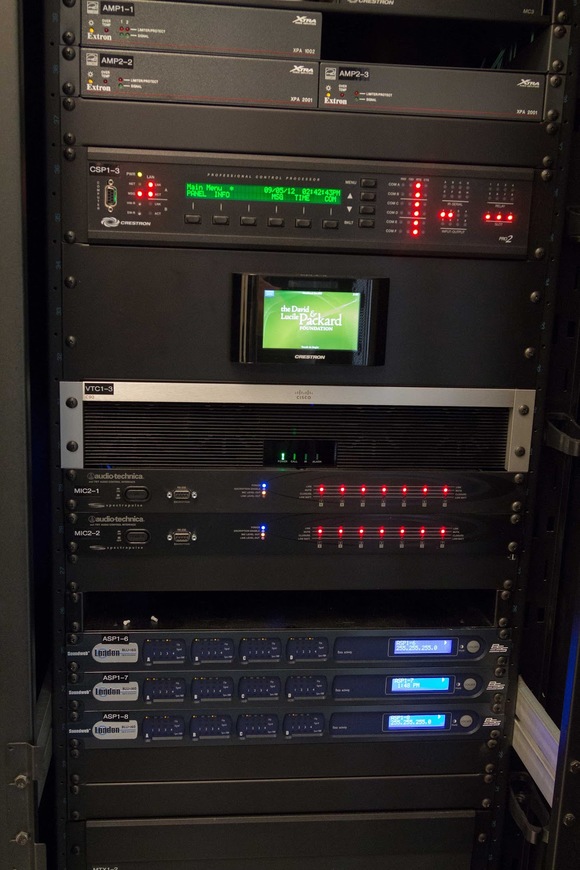 LOS ALTOS, California — The David and Lucile Packard Foundation was created in 1984 by Hewlett-Packard co-founder David Packard and his wife Lucile to provide grants to improve the lives of families, children and communities and to restore and protect our planet. The Foundation recently inaugurated its new headquarters in Los Gatos, which is the largest Net Zero Energy building in California. The building is equipped with a host of state-of-the-art amenities including a HARMAN BSS Audio Soundweb™ London conferencing system.
The system was installed by San Jose, CA-based Integrated Communications Systems (ISC), a communications contractor/integrator with a client roster that includes some of the best-known names in Silicon Valley. The BSS Audio system features two BLU-800 devices and eight BLU-160 devices, and includes six Soundweb London Telephone Hybrid Cards and 14 Soundweb London AEC (Acoustic Echo Cancellation) Cards. The BSS Audio devices are complemented by 32 JBL® Control 26CT in-ceiling speakers, six Control 128W in-wall and four Control 126W in-wall speakers installed in the Foundation’s six videoconferencing rooms and throughout the facility.
“Everything about the new Packard Foundation building is top quality and we wanted to install a system to match,” said Mark Berlo, Project Manager at ICS. “We chose the Soundweb London conferencing system because of its superior sound quality, especially its Acoustic Echo Cancellation. The AEC adapts very quickly.  We have had nothing but compliments on the sound quality.”
The BSS Audio components and other A/V equipment are located in one of four intermediate distribution frames that send the audio and video to the six conference rooms, and divisible meeting room. In addition, audio can be fed to the building’s center courtyard. The system is used primarily for conferencing and presentations.
“It’s a testament to how well thought-out the system is that the setup and commissioning went quite smoothly,” Berlo noted. “The system is versatile, works perfectly in keeping everyone connected both in the building and in remote locations, and the client is very happy with the sound quality.”
“I should point out that the David and Lucile Packard Foundation building is an LEED Platinum Certified Building, which is the highest rating given by the USGBC, the US Green Building Council. We’re proud to have participated in this project.”
For more information about Integrated Communication Systems please visit www.ics-integration.com.

HARMAN (www.harman.com) designs, manufactures and markets a wide range of audio and infotainment solutions for the automotive, consumer and professional markets — supported by 15 leading brands, including AKG®, Harman Kardon®, Infinity®, JBL®, Lexicon® and Mark Levinson®. The Company is admired by audiophiles across multiple generations and supports leading professional entertainers and the venues where they perform. More than 25 million automobiles on the road today are equipped with HARMAN audio and infotainment systems. HARMAN has a workforce of about 13,900 people across the Americas, Europe and Asia, and reported net sales of $4.4 billion for year ended June 30, 2012.