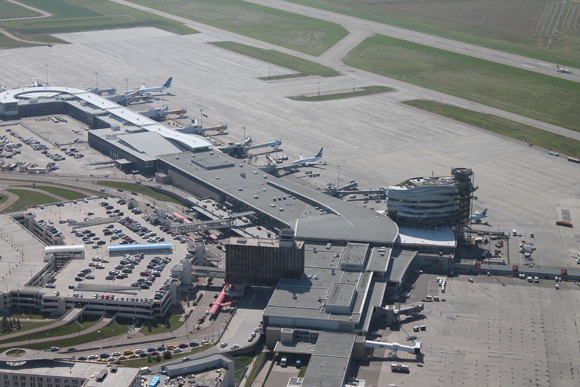 EDMONTON, Alberta — Edmonton International Airport (YEG) is one of Canada’s largest, expecting to serve seven million passengers in 2013. As part of a recent expansion program, the facility has increased its number of gates, enlarged a terminal, expanded the common use check-in system and added a host of additional upgrades including a much-needed new PA system featuring Com-Net Software’s AirportVoice software and pro audio equipment by HARMAN International.

The airport had simply outgrown its old PA system, noted Kurt Bakken, Common Use Passenger Processing Systems (CUPPS) Analyst for Edmonton International Airport. Bakken was starting to see some equipment failures and functionality issues and wanted to switch from an analog to a digital IP-based paging system. “We needed to provide the airlines with certain functionality that didn’t exist with the previous PA. The new paging system had to deliver pre-recorded and bi-lingual announcements to every airline and gate in the facility,” says Bakken.

“The new system gives us the ability to have any of our messages play at the touch of a button, which isn’t merely just convenient – it makes the airlines more productive,” Bakken stated. “Without having to worry about messages, they can now get 150 passengers on a plane in 10 minutes.”

Bakken states that it’s the airport’s responsibility to provide technology for the airlines. An integral part of this effort was the move to a common use system, which in addition to its numerous passenger check-in capabilities enables the airport to more efficiently allocate resources and be much more flexible in making announcements and implementing schedule changes. “Our new PA is a marriage of audio and software,” Bakken says.

The audio system upgrade and the airport improvement project went hand in hand, Bakken noted. “Our group is the airport IT group that oversees airport operations and passenger processing, along with baggage handling, the Flight Information Display System and other critical areas. We also manage many of the support companies related to our activities. Needless to say there was a lot of training and coordination involved between the airport staff, airlines and other concerned parties to ensure that a project of this magnitude was successfully completed.”

Bakken finds that the new PA and common use systems provide Edmonton Airport with numerous improvements and never-before-available capabilities. Fast, easy access to pre-recorded announcements is a big plus, as is the ability to interface with the airport’s FIDS (Flight Information Display System). The FIDS feeds flight information directly into the PA system, which enables an agent to readily select a flight from a list and choose which pre-recorded message should be broadcast about the flight (such as a now boarding announcement or final boarding call). The new system enables precise adjustments of hundreds of system parameters such as individual zone volume adjustments or even creating and editing new zones. If necessary, troubleshooting any part of the system is also easier and faster.