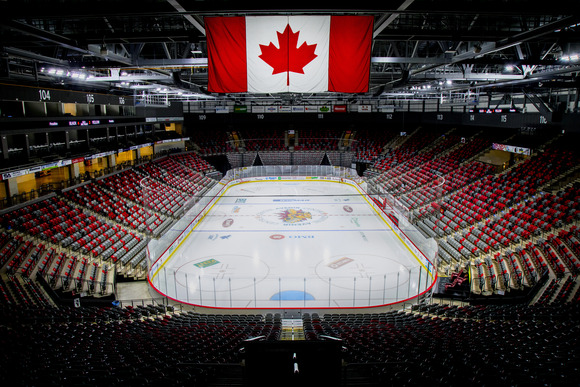 Avenir Centre is an 8,800-seat multi-use arena that is home to the Moncton Wildcats hockey team and Moncton Magic and basketball team. Although it primarily serves as a sports arena, Avenir Centre also hosts performances by renowned acts like Keith Urban and Jerry Seinfeld in addition to speaking events, trade shows and more. To provide exceptional sound quality for a wide range of entertainment and events, the arena needed a powerful audio system that could deliver even and highly-controlled sound coverage. To meet these objectives, SC Media Canada and Ivan’s Audio-Visual designed and deployed an end-to-end HARMAN system featuring JBL VRX line arrays, Crown DriveCore amplifiers, BSS BLU signal processors, and Soundcraft mixers.

“Hockey arenas require a robust sound system with a huge amount of SPL to overcome a crowd of more than 8,000 screaming fans,” said Brad Fox, Account Representative at SC Media. “We wanted the system to deliver as much energy into the seats as possible, while avoiding reflection off the roof and walls of the arena. You also need a lot of bass impact to give music extra thump and reinforce the energy of hits against the glass. Leveraging our expertise in arena installations, we delivered a cutting-edge HARMAN audio system that came in under budget, while also meeting the performance requirements of an NHL-level stadium.”

“The linchpin of the whole project was the VRX,” explained Fox. “We were looking for something with specific horizontal and vertical dispersion patterns, and VRX fit the bill perfectly. It was easy to install and has a ton of output for its size, too. The advantage of VRX is a combination of all of those features and its small footprint.”

Amplification is provided by 13 Crown DCi-series power amplifiers, including six DCi 4|2400N units for the main arrays, one DCi 4|600N for the full-range speakers and six DCi 8|300N models for the distributed audio system. BSS BLU signal processors route audio throughout the facility with a flexible digital architecture, controlled by EC-4BV wall-mounted control units in the locker rooms, press boxes, and other spaces. Audio in the arena is mixed on a Soundcraft Si Impact digital console connected to the BSS network by an SI-BLU Card. The facility’s dedicated press interview room features a compact, rack-mounted Soundcraft UI16 digital mixer controlled by a mobile device.

“We worked closely with SC Media Canada and the engineers at HARMAN to design the main sound system in the arena, as well as the facility’s distributed audio system,” said Serge Goguen, Integration Specialist at Ivan’s Audio-Visual. “The criteria for the system was outlined to very tight specifications for loudness and coverage. We modeled the system before the installation, and it far exceeded the minimum requirements. And after installation, the HARMAN system actually exceeded the modeled performance. The customer is very happy with the system’s coverage, loudness and impact.”

HARMAN (harman.com) designs and engineers connected products and solutions for automakers, consumers, and enterprises worldwide, including connected car systems, audio and visual products, enterprise automation solutions; and services supporting the Internet of Things. With leading brands including AKG®, Harman Kardon®, Infinity®, JBL®, Lexicon®, Mark Levinson® and Revel®, HARMAN is admired by audiophiles, musicians and the entertainment venues where they perform around the world. More than 50 million automobiles on the road today are equipped with HARMAN audio and connected car systems. Our software services power billions of mobile devices and systems that are connected, integrated and secure across all platforms, from work and home to car and mobile. HARMAN has a workforce of approximately 30,000 people across the Americas, Europe, and Asia. In March 2017, HARMAN became a wholly-owned subsidiary of Samsung Electronics Co., Ltd.