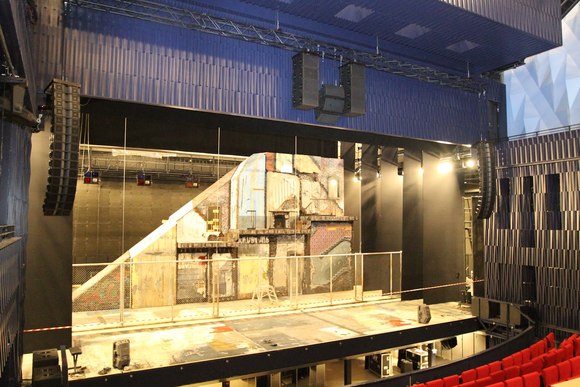 AMSTERDAM, The Netherlands – The new Kilden Performing Arts Centre (Konserthuset Kilden) in the Norwegian city of Kristiansand is one of the largest and most technologically sophisticated arts venues in Scandinavia. Constructed at a cost of 1.7 billion NOK (US $287.3 million) and covering a gross area of 15,000 square meters, Kilden features an advanced technological infrastructure across four separate halls. To meet the high demands of this prestigious new facility, territorial distributor LydRommet AS provided a massive variety of HARMAN audio components for the sound reinforcement systems in each space, including JBL VERTEC® line array elements, BSS Soundweb London digital networking, Crown CTs Series amplifiers and Soundcraft Vi Series consoles.

Owned by the Kristiansand Local Council and Vest-Agder County Council, who helped fund it, Kilden will be the joint center for Agder Regional Theater, Kristiansand Symphony Orchestra and Opera Sør (the regional opera company). ALA Architects of Finland designed the complex so that all halls can be used simultaneously. The Concert Hall is the largest space with 1,185 seats, while the Theater accommodates 700 seats, and the Multi Hall and Small Auditorium can seat 235 and 150 seats, respectively.

The Theater features 32 JBL VERTEC VT4886 subcompact line array elements powered by Crown VRack systems, a center cluster of two JBL VP7212/95DP-DA and one JBL VP7212/64DP-DA powered loudspeaker. An additional eight JBL AC26 ultra-compact loudspeakers and 12 JBL 8350 cinema surround loudspeakers round out the system, powered by Crown CTs amplifiers. The same Soundweb components were installed as in the Concert Hall, along with another Soundcraft Vi6.

The Small Auditorium features a pair each of JBL VP7212/95DP-DA powered loudspeakers and VPSB7118DP powered subwoofers, complemented by a BSS BLU800 and BSS BLU 120, and Soundcraft Vi1 (along with Vi6 stage box).

In addition to these, LydRommet has also equipped a 5.1 recording studio and control room with five JBL LSR6328P studio monitors and an LSR6312SP studio monitor subwoofer. The room also features a Soundcraft Vi4 desk and BSS BLU100 processing.The control room can pick up the MADI from the mixers in each of the four halls to record the performances. Patching can be either manual, or via an RME MADI bridge if also routed to either of the two OB vehicles outside, for which provision has been made in LydRommet’s clever cabling architecture.

For the official inauguration of Kilden on January 6, national broadcaster NRK brought its HD2 large TV bus and TR23 Soundbus, using its own Studer Vista 9 and Vista 8 mixing consoles respectively, in conjunction with the installed Soundcraft Vi6 and Vi4 (and three Soundcraft Si Compact boards).

The main music mix was carried out on the Vista 8 while a temporary control room was set up inside the building, where the 32-channel, 24-channel and 16-channel Soundcraft Si Compacts produced sub mixes for the TR23 OB—sending groups of strings from the symphony orchestra as well as groups from the 100-piece choir.

LydRommet had originally been invited to tender for the contract five years ago in a bid involving five companies. They successfully responded to a specification produced by Ivar Thommasen at Brekke & Strand Akustikk AS for a contract that included a video and digital signage section, a paging/show monitoring system and a stage management system in addition to the core speech and music reinforcement systems and complete cable infrastructure.

“The client asked for half-year adjustments to make the solution work in the best way defined for the job,” explained LydRommet project manager Alf Christian Hvidsteen. “This allowed us to optimize the system and make full use of the integrated solutions that HARMAN can provide.”

“The results, to put it mildly, were stunning,” Hvidsteen said. “The preview concerts as well as the opening ceremony were a very good test of both the acoustics and our loudspeaker choices. All systems worked very well and the customer and audience were very pleased with the results.”

High-resolution photos of the Kilden Performing Arts Centre are available at http://www.definitionbam.com/downloads/2012/Kilden_pictures.zip