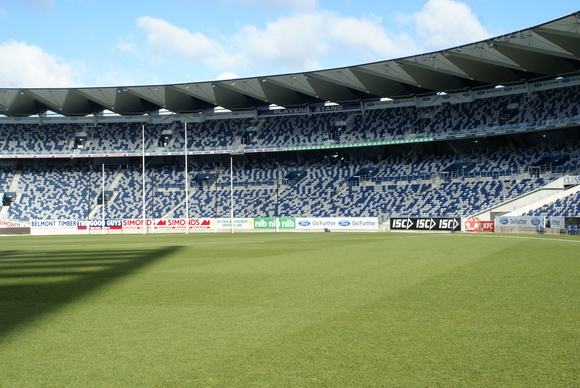 GEELONG, Australia – Simonds Stadium has become one of the biggest and most successful multi-purpose venues in Australia’s Victoria Region. The Stadium’s third stage of renovation was recently completed with the addition of a new southern grandstand, increasing seating capacity to over 35,000. During the renovation Simonds Stadium was outfitted with a HARMAN BSS Audio Soundweb London BLU-805 AVB system, making it the first venue in Australia to benefit from the extensive audio-video bridging system. Australian-based Total Events Co. performed the installation.

"The main audio feed is derived from the existing system control which is about 300 meters away from the new racks, so we used AVB to link from that system to the new zone," explained Bill Busbridge, Managing Director of Total Events Co. "The BLU-805 picked up its feeds nicely. The BLU-805 also controls three function spaces and it certainly made our job a lot easier.”

"We installed 14 JBL AWC129 speakers and 16 JBL AWC82 speakers for the seating bowl and under balcony fills," remarked Busbridge. "We chose them as they are robust, high powered and totally suitable for the application. They also fit in well with the architect’s aesthetic requirements."

Commenting on the simplicity the BSS Audio system offers, Busbridge said, “I've been back a couple of times to tweak the system and it is really simple to patch back in and make changes on the fly."